All the Birds in the Sky 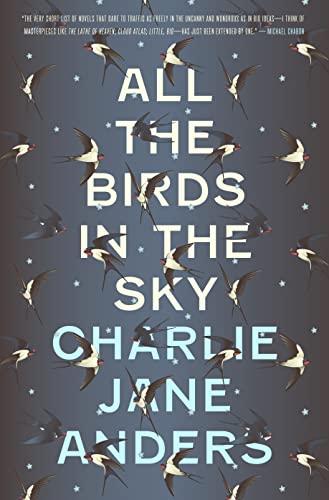 This isn't the only book in recent years to blend science fiction and fantasy, but it's one of the few that gets it right. All the Birds In The Sky is the story of Patricia, a natural nature witch, and Lawrence, a natural mad scientist, and how their personal lives and professional goals interact with the coming end of the world.

As small children, they each have an experience that sets them on their paths—one toward magic, as a guardian of nature, and one toward science, as the savior of the earth. They meet in middle school, and for a while, they're each other's only friends in a painfully truthful vision of a school where the nerds and weirdos have to band together against everyone who would hurt them. They both have bad home lives and normal school issues, but there's also a mysterious assassin that's trying to kill them, two-second time machines, attempts at flying and AI, and they each have a destiny no one will tell them about. Most people think they're both crazy. Sometimes, they think they're crazy, too.

After things get difficult and they split up, off to different high schools to pursue the different things they're good at, it's more than ten years before they meet again. While she serves as an undercover magic-welder trying to make the world better one person at a time, and he works with one of the world's top minds to save humanity, they remember what they once meant to each other, and discover what they could mean to each other again.

Along the way, there's a whole cast of strange and wonderful people on both sides. There are stories from Patricia's life in a wizarding school more bent than most of the others in books these days and interesting enough to make a book of its own. There are the day to day struggles of living in San Francisco as the world falls apart—literally—around them. And there's the politics of opposing groups trying to save humanity in mutually exclusive ways.

All the Birds in the Sky is such a neat book. Anders makes the blending of science fiction, fantasy, and near-future extrapolation seem effortless, and it works in good part because she doesn't dwell on it. The characters live the lives they have and the ones they've chosen, they clash and intersect and go back on their own paths, and there's not too much lingering on the dull parts. Nothing is made so clear that it's no longer interesting, but what needs explaining is given exactly enough time that even with talking birds, death rays, witches, and secessionist scientific communities, everything makes gloriously clear sense.

All the Birds In the Sky starts out like magical realism, with emphasis on the real around strange young kids who don't fit in, and shades gradually, delicately, into stranger and stranger territory without losing that realism established in the beginning. It manages to be beautiful and charming even when it's also being terrible and dangerous. Anders has a gift for dialogue and description both, so the weirdness is always visceral and plausible. The book as a whole has a way of simultaneously not taking itself too seriously while also being unflinching about how people's views and opinions shift and change through their lives.

By the end, everything comes together in a chorus of tropes from both genres and plot lines that tie up the way real life does—not cleanly, but well enough, and inspiringly. It's a riotous garden of a book, full of ideas and a fun sense of letting things go to see what happens.

All the Birds In The Sky takes on heavy themes like fate and choice and environmental collapse, but makes it feel more like it's dancing with them than wrestling. It's an accomplishment, hopeful and a little funny, even when everything is literally falling down around Patricia and Lawrence's ears. The conclusion leaves the door open for a whole new idea of a better future. Not the sterile chrome one we've inherited from the past where all the bad they're fighting comes from, but something bright and green and much better suited to today's world. Reading this book, you feel like you're witnessing a world both whimsical and rich.