Alice I Have Been: A Novel (Random House Reader's Circle) 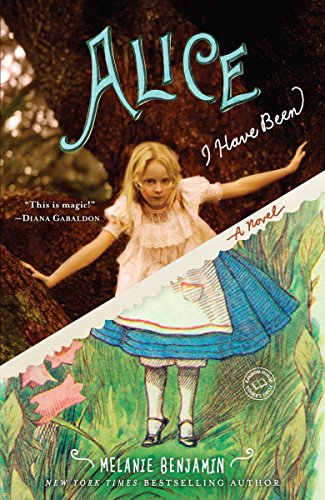 “I am so tired of being Alice in Wonderland.”
—Alice Liddell

It is perhaps inevitable that, with the release of Tim Burton’s take on Alice in Wonderland, there should be renewed interest in the two classic books that have not been out of print for one day since their publication a century and a half ago. In her warm and sympathetic historical novel, Alice I Have Been, Melanie Benjamin takes us into the mind and heart of “the real Alice,” and in doing so provides a rich evocation of Victorian England, which often seems as foreign to us in twenty-first century America as the “curiouser and curiouser” underground world encountered by her fictional namesake.

The book is written as a memoir, not a biography, and as such is fully dependent on the recollections of the elderly Alice, written down supposedly in 1932 after an American tour to celebrate the 100th birthday of Lewis Carroll. The memoir is divided into three parts: part one covers Alice’s childhood beginning in 1859 and ending with the incident which caused Carroll's banishment from the household; the second part takes the story up in 1875 when Alice is a young woman; and the third begins in 1914 and ends with the American tour.

Of course, no one would give a rip about Alice Liddell were it not for the relationship she developed over a period of over three years between ages seven and eleven with the awkward, stammering Mathematics Tutor, the Reverend Charles Dodgeson, who came to be known as Lewis Carroll. This relationship has intrigued fans and detractors for more than a hundred years, has been the subject of great speculation—both responsible and self-serving—and is the central focus of Benjamin’s historical fiction. What was the nature of their affection for each other and how did it manifest itself?

What happened between them that caused the well-known breach between Alice’s family and Dodgeson and was so pivotal in their lives? No one knows. Alice’s letters from Dodgeson have not survived, and the pages in his diary covering the period of time during which he knew Alice were cut out by his family. Benjamin does make a very credible speculation about “the incident” that covers most of the known facts and is therefore quite probable. I, of course, cannot reveal it.

Victorian England was obsessed with class. Alice Liddell was the daughter of the Dean of Christ Church, Oxford University. Hers was a privileged childhood. She was reared by a cold and rigidly proper mother and an emotionally distant father. She found affection, admiration, and encouragement in the person of Charles Dodgeson. In the company of her governess, Miss Prickett, dubbed “Prix” by Alice and her two sisters, Dodgeson took the girls on outings to the meadow just outside the Oxford quad and on extended trips rowing down the river where he entertained them with the most wonderful stories. Alice had no doubt that she was his favorite and it made her feel special. The others, her older sister Ina and her younger Edith, as well as Prix, vied for his attention and were quite envious when he seemed more drawn to the less than ladylike Alice. She became the favorite subject for his hobby, the new art of photography.

Charles Dodgson’s alleged pedophilia is treated here quite sympathetically for one very obvious reason: Assuming he had sexual feelings for little girls, there is no evidence that he ever acted on them. In her “memoir” the aged Alice cannot recall exactly what the “incident” was that forced the break with Dodgeson until the very last chapter. Obviously, it was not so traumatic as to wound her forever.

Dodgeson photographed many children; they were his primary subjects. In the memoir, Alice remembers the day Dodgeson photographed her for perhaps the most famous “Alice” picture and the excitement both seemed to derive from the enterprise. He had told her that she could take her shoes off and feel the grass between her toes, for she was to enact a beggar girl.

“Oh, that sounds tremendous! Shall I take my shoes off now?” I desired very much to please him; he looked at me wistfully, as if he was already imagining the gypsy me. Smiling, he set the camera down, bent slightly, in that stiff way of his, and stroked my cheek. His gloved hand was soft as the blanket I had placed, just this morning, on the new baby’s bed.

“Not now.” He jerked his hand away from me and looked over his shoulder, as if he feared someone was watching.”

For this photograph he dressed Alice in a torn dress that revealed more skin than would have been appropriate in public. Other children he photographed nude, and that has caused a great deal of speculation. The difficulty we have is imposing twenty-first century mores onto mid-nineteenth century society. Many photographers of the period also photographed nude and semi-nude children acting out various roles from literature, myth, and folklore. Author Karoline Leach (In the Shadow of the Dreamchild) contends that photographing nude children did not necessarily point to pedophilia. In Victorian England, children were not considered sexual beings and such photographs of them were common. Photographing nude adults, on the other hand, was scandalous.

Although Dodgeson is aware that photographing of Alice in a gypsy dress could be misunderstood by some, yet he finds in her a gift for life that sets her above all the rest of the little girls, all of which, to him, look exactly the same. One gets the feeling that it was inappropriate mainly because of their differences in class. Whereas some children posed for such dramatic photographs, girls of Alice’s class did not. Yet it was Alice who most appealed to him as a subject.

“That’s why I want to photograph you—only you could be my gypsy girl.”

“Oh!” I hadn’t thought of it that way, that the notion tickled my insides until I smiled. I beamed at him as he busied himself with the tripod and camera. However did he do it? How did he make me feel so special? I wondered if he had anyone in his life to do the same for him; I knew that he probably didn’t. He did seem so lonely at times.

Their relationship may have been a sensual one, but only once crossed the line to the sexual; the line between the two are not so clearly drawn as we might wish them to be. It was sufficient to cause Dodgeson’s banishment from the Liddell household, but it must be pointed out that it was not so serious as to cause his dismissal from Oxford even though Alice’s mother, angered when told of it, demanded his dismissal. Alice writes:

With a cry, a horrible, anguished—furious—cry, Mamma tore through the nursery, tore through my things—my beautiful little box where I stored all my treasures, my drawers, my cupboards and trunks—looking for something, looking for more. She took the letters, and she threw them in the nursery hearth stirring them up, ripping them with the poker, all the while crying and saying things I could not understand, “You wicked, wicked girl! That horrible man! You’re ruined, that’s what! Ruined! No one will ever have you now!”

Alice’s father was, the Dean of the School, and did have the power to dismiss Dodgeson, but he did not think it best, so the Mathmatics Tutor remained and was even elevated in his position

Ultimately, the portrait of Dodgeson that emerges from these pages is that of a very unhappy man, an exceedingly child-like man, shy, awkward, affectionate and lonely, above all a gentleman, who realized almost immediately the mistake he made.

His hat was in his hands, his face was pale, his soft sensuous mouth was open, but for once he had no words; no story, to help him make sense of it all. He simply stood, a tall, slim, suddenly lesser man.

He looked as if he had just been robbed of something precious.

He lived with that regret the remainder of his days.

One is led, obliquely, into the opinion that he was what we would call today a pedophile, but, the author seems to say that we cannot help our feelings and therefore should not be judged for them; we may only be judged on what we do in response to them. Charles Dodgeson rarely if ever acted on them. The one time he did cost him dearly.

Was their relationship itself harmful to Alice? Hard to say, but Benjamin thinks not. In her narrative, Alice is harmed more by her friend’s sudden departure from her life and the family’s response to the incident, than by anything he did with her. Indeed, their perceptions were to shape the rest of her life.

As a young adult, she was beloved of Prince Leopold, Victoria’s youngest son, who desperately wanted to marry her, and the queen was very close to giving her consent, but once certain rumors of scandal reached her ears, Alice was refused. Though loving Leopold, she eventually married Reginald Hargreaves and lived out her days at Cuffnells, his estate in the Hampshires as a typical Victorian gentlewoman, as far from the portrait of Alice in Wonderland as one can imagine.

She was exceedingly class conscious, calling all of her servants “Mary Ann” because she could not be bothered to remember their real names. She was, like her mother: rigidly proper and ladylike—even when her husband’s estate fell to ruin and was about to be foreclosed upon, forcing her to sell her handwritten manuscript of Alice’s Adventures Underground, illustrated by Dodgeson and presented to the young Alice Liddell by post after their falling out.

It is after that sale, and after an “Alice In Wonderland” tour of America that she finally brings herself to read Lewis Carroll’s book. Afterward, she sits down to write of him and of her life before and after the incident and how the popularity of the fictional Alice’s adventures became so tiresome a burden to her. Benjamin has written an entirely credible fictional memoir here; one that Alice Liddell, had she the inclination, could well have written. It is meticulously researched and richly rendered.