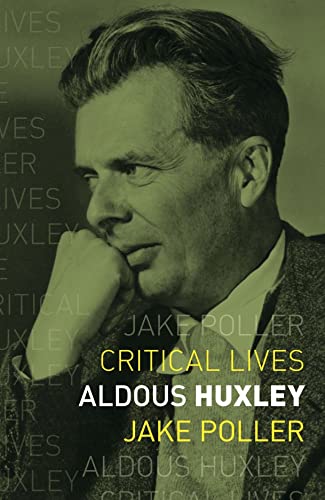 “Poller’s Aldous Huxley offers readers a clear, thorough guide to Huxley’s metaphysical thought and the process through which it evolved over the course of his career as a writer.”

One of the great minds of the 20th century, Aldous Huxley left his mark on Western culture with two major works, the dystopian novel Brave New World and The Perennial Philosophy, his exposition of the world’s mystical traditions. These two works exhibit the poles of his thought: one a satire of modern society and its controlling institutions, the other showing the pathway to transcendence of the conundrums of daily life and the limitations of our rational minds.

Poller, a Professor of English at Queen Mary University in London, tells us in his Introduction that he has not written a fully rounded portrait of his subject. His focus has been on Huxley’s intellectual journey toward a mystical apprehension of life, a dimension of Huxley’s mind Poller believes earlier biographers have neglected.

Poller traces this journey through close readings of Huxley’s novels, essays, and plays. Important details of Huxley’s personal life provide a scaffolding for Poller’s analysis and permit insights into the psychological sources of Huxley’s philosophy of life. Poller refers readers in search of a fuller treatment of Huxley’s life to previous biographers.

Huxley was born near the close of the 19th century into a family of eminent British educators and intellectuals. His father Leonard was a schoolmaster and writer, and his grandfather Thomas Henry was a scientist who generated controversy by his support of Darwin’s theory of natural selection.

Throughout his childhood and adolescence Huxley suffered from a variety of physiological ailments and vulnerabilities that alienated him from his own body and turned him inward. During his teenage years he experienced a series of physical and emotional traumas that scarred him emotionally and made him acutely aware of suffering—his own, and others’.

When he was 14 his mother, to whom he was deeply attached, died of cancer. At the age of 16, he contracted keratitis punctata, a disease of the eyes that nearly blinded him and confined him to a darkened room for a year and a half. He recovered enough of his sight to be able to read with a magnifying lens and resumed his studies. Then, when he was 18, his older brother Trevenen, depressed by a series of personal setbacks, hung himself on the grounds of a nursing home. These losses forced on Huxley a sense of social isolation and a defensive resistance to close emotional attachments to other human beings. They also embedded in him a deep sense of longing that he would express throughout his writing life in many of his works of fiction.

Following his studies in English Language and Literature at Oxford, Huxley became a schoolmaster like his father and began publishing poetry and short stories. He also became a frequent guest of the wealthy arts patron Lady Ottoline Morrell, and rubbed shoulders with the members of her intellectual circle, who included Virginia Woolf, Clive Bell, Lytton Strachey, and Bertrand Russell. Through her he met Maria Nys, a Belgian refugee whom he would marry in 1919. He also met and befriended D. H. Lawrence.

Huxley had been rejected for service in the British army during World War I because of his poor eyesight. His realization of the horrors of this war and the moral failings of the world’s political leaders that had led to it made him a pacifist and steered him in the direction of spiritual solutions to the problems that continually beset mankind.

In 1921 Huxley and Maria moved to Italy, where it was possible to live on his meager writing income. Here he wrote his first novel, Chrome Yellow, a book that set the pattern for many of his future novels. Its protagonist is a Huxley-esque figure who struggles to reconcile the carnal appetites of his body with the spiritual yearnings of his soul. The book was enough of a commercial success to land Huxley an annual stipend of five hundred pounds from his publisher.

For the next 15 years, the Huxleys lived primarily in Europe, first in Italy, then in the south of France, where they bought a house. Huxley was a prolific writer, and sales of his books enabled them to live comfortably, if not lavishly. In 1925 they made a world tour that brought them briefly to the United States. Huxley was appalled by the culture he found there. His impressions became the seed of his most famous novel, Brave New World, a blistering satire on the Americanization of culture through standardization, mass production, and relentless consumerism propelled by advertising.

Despite Huxley’s antipathy to the American way of life, he and Maria moved to Los Angeles in 1937, primarily for its mild climate. The Huxleys remained in Southern California for the remainder of their lives, although they frequently made trips to Europe and England.

During this period of his life, Huxley turned increasingly to the study and practice of spiritualism as a means of living on a more exalted plane of reality. His most profound exposition of the spiritual life is contained in The Perennial Philosophy, a work that brings together the mystical teachings of the world’s major religions in an attempt to demonstrate that all religious traditions emanate from the same concept of the Divine Ground, and that all religious teachings offer a pathway to that Divine Ground, the Godhead that exists simultaneously in the external world and within the deep self of every human being. The book is an elaborate argument for the commonality of all the world’s people, that once recognized and accepted, makes warfare and all forms of violence against nature senseless and unnecessary.

Poller considers The Perennial Philosophy Huxley’s major contribution to Western culture and sees in it the source of Huxley’s legacy to many of the counter-cultural movements of the last half-century. Its implications reach into various movements for self-transformation and social reform as well as into activist movements for transformation of society’s relationship to the natural world.

In his personal life Huxley sought more than an intellectual understanding of the mystical apprehension of reality. He sought the mystical experience itself, the immersion in a timeless now that dissolves all barriers between subject and object, self and other. Huxley was unable to access the mystical state through the practice of meditation, yoga, hypnosis, seances with mediums, and all the other paranormal claptrap. But he did achieve it by ingesting mescaline, which he did on several occasions under the supervision of psychiatrists. Through this drug, Huxley arrived at experiential knowledge and acceptance of the principle of love as the primary motive energy of the cosmos.

In this moment of realization Huxley believed he had reached his highest human potential, and he took it upon himself to share this realization with others in his final novel, Island. Island presents the reader with Huxley’s vision of a utopian society, counterpart to Brave New World, in which “the end of human life is to realize human potentialities to their limits,” and the function of society is to make this realization possible for all its members.

When Huxley lay on his deathbed in November 1963, succumbing to cancer as did his mother and Maria before him, his second wife Laura Achera administered LSD to convey him out of this world.

Poller’s Aldous Huxley offers readers a clear, thorough guide to Huxley’s metaphysical thought and the process through which it evolved over the course of his career as a writer. The biographical data Poller provides, while thin, gives sufficient context from Huxley’s private life for understanding how his personal experiences gave rise to his world view and found expression in his many works of fiction. That said, Poller regards The Perennial Philosophy as Huxley’s master work, far more significant than Brave New World, the novel for which he is best remembered.