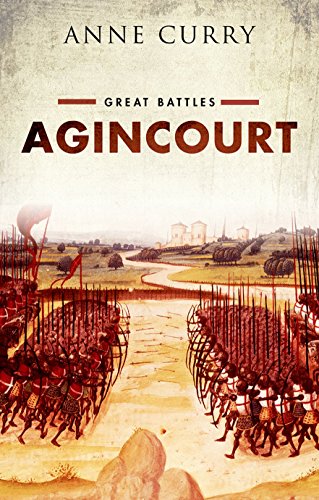 “does an admirable job of showing how national identity, myth-making, and popular culture can influence the historical narrative . . .”

This is an extremely timely book for the 600th anniversary of this battle, for which the author was the co-chair of the “Agincourt 600” committee, tasked with organizing commemorations for the anniversary of the battle.  The third volume in this series edited by Sir Hew Strachan provides a unique look at the battle from a history as memory perspective, rather than a traditional battlefield history.

Drawing on her expertise as a medieval historian specializing in the battle, including authoring Agincourt: A New History in 2005, Curry offers a unique insight on the cultural and heritage aspects of the battle from both the British and French viewpoint.

For the British, while the battle was not considered the most decisive of the mis-named Hundred Years War, it has been one of the best known and most chronicled. Ironically, this has not been driven by historical study, but a Shakespearean play. Henry V, one of the bard's many dramas about great English kings, has, according to Curry, supplanted many histories as the standard tale of this great battle. The translation of the play into two movies, one from 1944 starring Sir Laurence Olivier, and the more recent 1989 version by Kenneth Branagh, have only heightened the view of the battle in popular culture. Curry goes on to show how the battle has influenced English poetry, music, and literature since 1415, including a fascinating introduction showing how even John Lennon was affected by the mythology of the battle as a young boy.

For the French, the battle become more of a story of the on-going royal feud between competing nobles and almost a prelude to the rise of Joan of Arc and the final expulsion of English power and claim to the French throne.

The battle also has its controversies addressed by the author, including a very dark episode of the English killing French prisoners after the battle when a French counter-attack was feared. Needless to say, this episode was not incorporated in Shakespeare's play and has been generally minimized in the glorious accounts of Henry V's triumph and eventual assumption of the French crown.

This is a very quick read and is intended for a reader already familiar with the general events of the battle. It does not break any new ground on the battle itself, but does an admirable job of showing how national identity, myth-making, and popular culture can influence the historical narrative of an event over time.