Agents of Empire: Knights, Corsairs, Jesuits and Spies in the Sixteenth-Century Mediterranean World 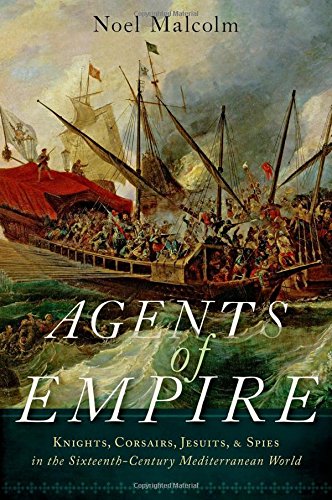 According to his own account in the Preface, Noel Malcolm states he began his research for this book over 20 years ago when he was reading a 16th century Italian book on the Ottoman Empire. He tells us that “the hairs began to stand up on the back of his neck” because he came upon the reference to an Albanian, Antonio Bruni, discussing the history of his country. Malcolm, a noted historian on the Balkans, was awestruck, for the referenced work meant that it was the first treatise about Albania written by an Albanian.

Thus began Malcolm’s quest to learn who Antonio Bruni was and what he wrote. The journey was long. His research was exhaustive for it required a great deal of travel, visiting numerous libraries and archives, and sifting through thousands of documents. His time and effort has culminated in a superbly written history of the late 16th century from a unique perspective.

Noel Malcolm’s book is an excellent microhistory. The idea of writing this type of history originated in Italy in the 1970s and became quite popular in Europe, especially France and Germany in the 1980s and 1990s. For those who are not familiar with this type of historical research it is the intensive study of a small unit of history, for instance an event, a location such as a village or town, and individual, etc. But it is not a biography.

In 1981 historian Bernard Bailyn expressed his deep opposition to this form of historical research by stating that since it focused on one event or family, for example, it obscures rather than illuminates history. Such is not the case with this superlative work by Noel Malcolm. Most certainly he traces the history of the Mateo Bruni-Marnaba Bruti family after their marriage, but to suggest that this book obscures rather than illuminates history is dead wrong! The book covers four generations from about 1550 until 1600 CE.

Agents of Empire is thoroughly researched. It includes 76 pages of notes and an extensive 48-page bibliography that contains only those works cited in the text or notes. The author also provides the reader an excellent glossary. In addition the book includes 39 illustrations and maps. Perhaps the most important aid for the reader is the simplified family tree. The reader will, in all likelihood, be referring to this marvelous aid on numerous occasions.

Italy agreed to join the Allied cause in WWI provided that after the war the Allies would agree that Albania be given to Italy. What a strange request. Albania of all places. Why was this? And Mussolini, why was he so intent on invading Albania during WWII? Could the reason for Italy’s obsession with Albania be that once it was part of the Venetian Empire? In this book Noel Malcolm tells us about Albania’s relationship to Venice and discusses the Ottoman conquest of it. Is this not an example of what Charles Joyner meant when he stated that microhistory aspires to ask large questions in small places?

The author’s story about the Bruni-Bruti family is truly interesting. The four generations of this family provide many interesting perspectives about this period in history because of the career paths taken by its various members. For example one member had a knack for languages. Since the Venetian Empire was involved in a love-hate relationship with the Ottoman Empire it needed people well versed in the Turkish language to be stationed in Istanbul to assist its diplomats and help its merchants and traders.

One member of the family was a translator, one was an Archbishop, another was a Papal Navy Commander, and one more was the Ottoman voivode for Moldavia, Wallachia, and Transylvania. Thus we get an insightful perspective of that period especially with regard to the inner workings of the Ottoman government and its foreign policy as well as the nuances of the commercial relationship between the Venetians and Ottomans.

But the author does not stop there. Many members of this family were in critical positions, and they had a lot of power and influence. Spain and the Ottoman Empire were in conflict over who would control the Mediterranean intelligence was a valued commodity. Perhaps espionage was not a way of life, but it was extant and the author discusses this in a very interesting way. It is worth noting that several members of this family took advantage of their positions and worked for Christian and Ottoman governments—and at times both.

Warfare, corsairing, piracy, and raiding were a way of life in the 16th century. These existed in Christian lands as well as throughout the Ottoman Empire. These activities were not always sanctioned by the leaders of the various political and ethnic groups. Even so it was lucrative. It is important to remember though that one could be a merchant today and a corsair tomorrow or the head of some locality who turned a blind eye for a cut of the profits. As a result prisoner (POW) exchange, slavery, and ransoming was quite prevalent.

The author gives us a very detailed explanation about how the systems of POW, slavery, and ransoming worked through the experiences of Bartolomeo Bruti who was quite good at it. This was most interesting. The author tells us that an able-bodied Christian captive could be purchased for 80 to a 100 ducats during times of peace, but that price could easily drop to 30 or 40 during times of conflict primarily because of the glut in captives. The typical intermediaries in negotiating exchanges tended to be merchants, but sometimes an ordinary person who was in the right place at the right time could serve this purpose.

Since one member of the family was a diplomat we learn a great deal about the geopolitical issues of the day and not necessarily from either an Ottoman or European perspective, but from a more objective one. For example Malcolm explains in great detail the importance of not only the Balkans, but several eastern European lands such as Wallachia, Transylvania, and Moldavia to both sides. Interestingly the Ottoman policy to its vassal states was one of benign oversight as long as the local ruler toed-the-line so to speak.

The author also describes in interesting detail political and religious issues going on in Europe and helps clarify the tension between the Christian communities and the Ottomans. For example Emperor Charles V’s Spanish Empire included Spain, the Netherlands, and territories in central and southern Europe. Many bordered Ottoman territory. As a result Charles V as both Emperor of the Spanish Empire as well as the Holy Roman Empire had to make concessions to the Protestant Princes of Germany. Thus the Ottomans were checkmated on land. But you need to read the book to learn more about the details.

In addition to tensions between these two empires there were also religious tensions not only the obvious Christian-Islam one. There was also tension between the Roman and Orthodox churches. To make matters worse the Roman Church had to worry about the increased influence of Protestantism. These religious issues were not only the concern of Rome, but the Holy Roman Empire as well.

Pope Pius V organized the Catholic League with the intent of confronting the Ottoman Empire head on, but there were problems to be resolved first. In his discussion of the Lepanto Campaign the author discusses these in great detail. The culmination in these efforts was the naval Battle of Lepanto. In this chapter Malcolm reviews in great detail the types of ships involved, concern about the use of slaves to row the vessels, specifically that they might stop rowing during a critical moment with the resulting consequences should they do that, battle tactics in the broader sense, and the types of weapons used.

In addition one of the family members involved on both sides, Gasparo Bruni, was the captain of Colona’s flagship, and we see the battle through his eyes. The other members of the family participating was Gasparo’s brother Archbishop Giovanni Bruni, the Bishop of Bar, who was a slave on one of the Ottoman galleys. At times during the battle the two brothers may have been separated by only meters. In the end only one survived. The description of Archbishop Bruni’s body after the battle indicates that he died a horrible death.

This book is an invaluable work for the academic who is not content with either the European of Ottoman perceptions of the late 16th century conflicts and tensions throughout the Mediterranean and the Moldavia, Transylvania, Wallachia regions. It contributes an interesting perspective to the research literature of the period. But this book should also be read by the non-academic history buff. It is refreshing, interesting, and engaging.