Against Thrift: Why Consumer Culture Is Good for the Economy, the Environment, and Your Soul 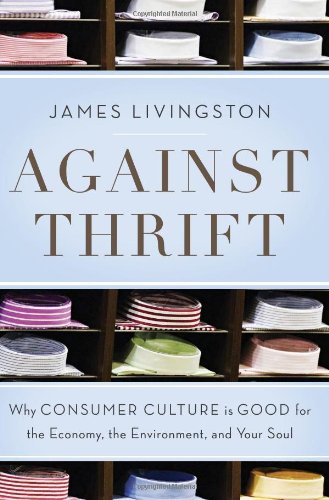 “It’s too bad, really, that Against Thrift fails at its most basic level. Dr. Livingston is daring, original, obviously well read, and—to a liberal reader—well intentioned. If only his scenario were plausible. Who wouldn’t want to have a shopping spree and still eat, too?”

From time to time, economic theories appear that are just too good to be true. LBJ’s guns and butter: Wouldn’t it be nice to think that we could afford unlimited outlays on both national defense and the social safety net without suffering the consequences of inflation or higher taxes? Reagan’s supply side nostrum: Wouldn’t it be just as nice if we could cut taxes without either reducing spending or causing huge government deficits?

Sadly, James Livingston’s premise in Against Thrift must join that list of ideas that sound too good to be true.

Dr. Livingston—a history professor and author of five other books on economics and social culture—proposes, essentially, that we could revive the global economy and be better human beings if we all just go shopping. (Ironically, for a proud liberal, he is echoing George W. Bush’s controversial exhortation after 9/11.)

As Dr. Livingston sees it, consumer spending not only props up the U.S. economy, but is also morally superior to the Protestant savings ethic. After all, consumerism—in the form of eating at a Woolworth’s lunch counter—was a major catalyst in the American civil rights movement. It helps people “create identities . . . buying and selling what we want to be.” A sympathetic observer might add that the strongest protests against China’s authoritarian rulers today focus on quality-of-life issues, not political rights.

Interesting points, so far. But from there the author makes the questionable leap that underlies his book: “Saving for a rainy day—treating this life as austere probation for another—is a soul-crushing emotional trap as well as an economic dead end.”

Really? And he is making this contention now, during a severe global economic recession, in which most people can afford neither to spend nor save.

In short, Dr. Livingston builds his case on some intriguing research, some stretching of other facts, a brave willingness to be a contrarian, and a strong serving of wishful thinking. To his credit, he includes in support of his contention an impressively wide-ranging array of topics: from jazz to William James to the Velvet Revolution in Eastern Europe.

He starts, reasonably, with a genuine dilemma that perplexes most mainstream economists and political scientists: Historically, consumer spending has accounted for about two-thirds of U.S. economic activity. To pull the nation out of recession, people must buy more stuff so that companies will hire more employees to produce that stuff.

But overspending is basically what put us into recession to begin with, as Americans took out second mortgages and home equity loans and racked up huge credit card bills that they can no longer afford to pay off—if they ever could in the first place.

Against Thrift presents compelling evidence that in recent decades, automation and other labor-saving changes have enabled the economy to boom with far less investment —from either reinvested corporate profits or personal savings—than economists have assumed. As Dr. Livingston writes:

“After 1919, net private investment becomes pretty much irrelevant to growth. This means that both corporate profits and personal savings become more or less redundant . . . both of these forms of savings will accumulate as idle surpluses that fuel speculative markets, then inflate bubbles, and finally cause full-blown economic crises.”

One logical implication of this theory is that cutting corporate taxes will not get us out of recession. Another is that “soul-crunching” austerity makes people unhappy and inhibits the consumer spending that actually drives national growth, without adding anything to the capital pool.

Even if all that is true, individuals aren’t usually motivated to build up nest eggs for the sake of the greater good. They have practical, personal reasons for squirreling away their pennies, and generations of middle-class people throughout the developed world have managed to juggle both spending and saving. Just what are these economy-buttressing, free-spending Americans supposed to do when they lose their job, or their kids face a medical emergency?

Dr. Livingston doesn’t really mean that people should save zero, does he? Well, maybe he does, since he inveighs so often against saving. His solution seems to be income redistribution, a concept that has no possibility of occurring in the United States. Has he forgotten how the Republicans used that phrase against then-candidate Barack Obama in the 2008 presidential election?

That’s not the only practical problem with this book’s prescription. Social critics and environmentalists increasingly question whether the planet can sustain mass, Western-style consumption. Dr. Livingston gives a nod to that concern in seven pages at the end of the book, at which point he airily promises that Michael Pollan and the trend toward organic food will save us.

Some of the evidence Against Thrift cites to try to back up its premise is, to put it, mildly, odd. Dr. Livingston admiringly notes that Samuel Gompers helped found the U.S. labor movement in the late 19th century with the rallying cry that workers needed “more.” What he fails to point out, however, is that Gompers’ laborers had a heck of a lot “less” than Americans do now.

And Dr. Livingston must be parodying himself when he asserts that advertising is as convention shattering as Einstein’s theory of relativity and that “fashion or style is the informal language of modern individualism.” Um, don’t advertising and fashion more likely encourage blind obedience to the tastes and morés of Paris, Milan, and Hollywood? (In fairness, the book was written before the Occupy Wall Street movement proved that the hippest consumers—i.e. the young—do not really like Big Business or Madison Avenue.)

It’s too bad, really, that Against Thrift fails at its most basic level. Dr. Livingston is daring, original, obviously well read, and—to a liberal reader—well intentioned. If only his scenario were plausible. Who wouldn’t want to have a shopping spree and still eat, too?