The Afghanistan Papers: A Secret History of the War 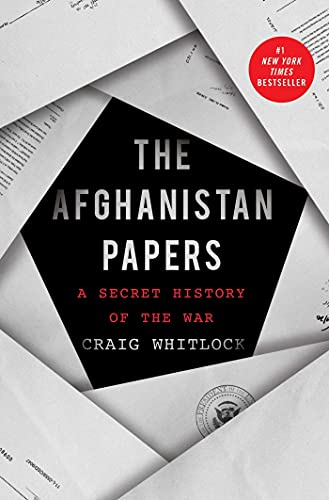 “This book has been compared to the Pentagon Papers in providing a candid description of US decision-making, or lack thereof, and will certainly stand as an excellent starting point to understanding the course of a war that began with universal support and ended with confusion and despair.”

What went wrong in Afghanistan? How did a war that had almost universal support from Americans devolve into an ignominious retreat by the US that is rapidly taking the shape of South Vietnam in 1975? And what are the long-term implications for American foreign policy of what is becoming another debacle in the Middle East?

These are some of the questions this timely new volume by Craig Whitlock tries to address, coming on the 20th anniversary of 9/11 and the 20th anniversary of the beginning of America's longest military conflict. Using declassified papers from the Special Inspector General for Afghanistan Reconstruction (SIGAR), a group formed to conduct oral histories concerning the conduct of the war and lessons learned, it presents a disturbing picture of a conflict adrift in changing priorities, a lack of focus and strategy, and, most importantly, a complete misunderstanding of Afghan culture and politics.

Although the U.S. began with seemingly limited goals—the destruction of Al Qaeda and the overthrow of the Taliban, strategic confusion began almost as soon as the lightning campaign begun in October 2001 ended. Deliberately trying to keep a light footprint of US troops, the author describes two major missed opportunities that affected the next 20 years: the spurned offer by many Taliban to disarm and enter the political process and the chance to capture or kill Osama bin Laden in the Tora Bora region in December 2001. Both of these failures caused the US to begin a mission creep that would drive US policy toward the conflict.

As more US troops and resources moved in the country, the strategic mismatch between means and ends soon became apparent to many US military officers in the country, but was minimized by the Bush Administration. The attention of political and military leadership on the rapidly growing insurgency in Iraq pushed Afghanistan into an economy of force conflict, even as the Taliban begin reconstituting in Pakistan to begin an insurgency of their own.

Two issues particularly highlighted by the author are the roles of Afghan warlords and the opium trade, two constant obstacles to the US vision of stable and secure Afghanistan. Combined with the intrigue of tribal and ethnic politics and the endemic corruption throughout the Afghan government and military and the ability of forming a truly stable and friendly government seemed a forlorn hope.

By the time the Obama Administration took over, the war was already going badly, and Obama’s war policy was trapped by his campaign promises to end the war in Iraq and focus on the “good war” in Afghanistan. While the military wanted to try a carbon copy of the Iraq Surge strategy, strategic confusion again reigned and although a short-term surge secured some battlefield gains, the constant ability of the Taliban to retreat and regroup in Pakistan ensured their ability to outlast the American surge.

Although Obama decided to declare an end to combat operations in 2014, US forces remained engaged in the country through the end of his term and through the Trump Administration. The strategic incoherence also continued, as U.S. military commanders struggled to train sufficient numbers of military and police forces to secure the country while trying to explain to an increasingly skeptical public that the war was not failing.

The book ends with the beginning of Trump’s negotiations with the Taliban in 2019–2020. The drawdown of US troops continued, with less than 2,500 in country when Trump left office in January 2021.

Watching the headlines now, with the Taliban overrunning the country in their own lightning campaign, one cannot miss the parallels to the fall of South Vietnam in 1975. Historians will no doubt be making comparisons, however imperfect, between the conflicts for years to come. This book has been compared to the Pentagon Papers in providing a candid description of US decision-making, or lack thereof, and will certainly stand as an excellent starting point to understanding the course of a war that began with universal support and ended with confusion and despair.