Adriatic: A Concert of Civilizations at the End of the Modern Age 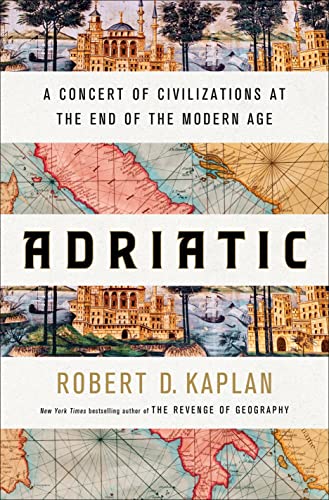 “Kaplan is one of the leading geopolitical thinkers of our age.”

Robert D. Kaplan’s new book, Adriatic, is both unsatisfying and hard to put down. It is unsatisfying because there are too many digressions—autobiographical and tourist—that distract from the author’s historical and geopolitical analyses. But it is hard to put down because scattered throughout the narrative are gems of historical and geopolitical insight.

Kaplan is one of the leading geopolitical thinkers of our age. His books Monsoon: The Indian Ocean and the Future of American Power, The Revenge of Geography, Asia’s Cauldron: The South China Sea and the End of a Stable Pacific, and The Return of Marco Polo’s World: War, Strategy and American Interests in the Twenty-First Century, are in essence a multi-volume magisterial tutorial on the geopolitics of the 21st century.

Adriatic has echoes of those earlier works, but it is not as focused on geopolitics. It is part travelogue through the Italian and Balkan lands of the Adriatic Sea, part reminiscences of his prior travels through the Balkans, part ethnographic and cultural history of the region, and part autobiographical and introspective. Indeed, Kaplan expresses his own doubts about the possible lack of coherence in this book.

Kaplan’s approach in this book is to travel to a key city or town of the region and read about its history and culture with books that he has brought with him on his travels. Sometimes he meets up with political and cultural leaders. He frequently compares and contrasts a city’s or town’s appearance today with what he saw decades ago.

The journey begins in Rimini, Ravenna, Venice, and Trieste on the Italian shore of the Adriatic; thence to Piran, Koper, and Ljubljana in Slovenia; Rijeka, Zagreb, Split, Korcula, and Dubrovnik in Croatia; Kotor and Podgorica in Montenegro; Durres and Tirana in Albania; and finally to Corfu in Greece.

Kaplan calls the Adriatic “a globe in miniature.” “All of Europe is distilled here,” he writes, “within a geography that one can actually comprehend and therefore grasp.” And in each of the countries he visits, Kaplan recognizes the influences of west and east--Rome and Byzantium, Catholicism and Orthodoxy, Christian and Muslim, Teuton and Slav.

In Ravenna, Kaplan reads Dante Alighieri’s The Divine Comedy, which he notes is both a work of philosophy and a “historical and geographical adventure.” In Venice, he reads Francis Oakley’s The Emergence of Western Political Thought in the Latin Middle Ages, Mary McCarthy’s Venice Observed, and descriptions of Venice and its history by John Julius Norwich, Henry James, Joseph Brodsky, and others. In Trieste, Kaplan turns to Claudio Magris’s Danube: A Journey Through the Landscape, History, and Culture of Central Europe. In Albania he consults Miranda Vickers’s The Albanians: A Modern History, while in Corfu it is Richard Clogg’s Short History of Modern Greece.

And throughout his journey, Kaplan references the geographical musings of Fernand Braudel who understood the world of the Mediterranean Sea, of which the Adriatic is a part, perhaps better than anyone.

Kaplan understands that Europe is but a peninsula on the greater continent of Eurasia. It was shaped, molded by Eurasian invasions. It met the challenge of the Muslim Saracen offensives. It transitioned from Christendom to Westphalian nation-states and engaged in centuries-long balance of power wars. It nearly committed suicide in the two world wars of the 20th century. With the end of the Cold War, the European Union and NATO serve to keep a lid on the potential competing nationalisms of European countries, though he worries about populist-nationalist political movements in France and Central Europe.

The Balkans remain politically unstable. Kaplan laments the decline of empires, which in the past worked effectively to control violent nationalist aspirations. He singles out the Hapsburg Empire in this regard, but also mentions Tito’s Yugoslav empire, which kept the lid on the seething hatreds of various Balkan national groups.

The Adriatic, Kaplan writes, “has always been a civilizational transition zone, where different cultures have vied for influence and power.” Geopolitics is about “the battle for space and power,” and Kaplan sees the Adriatic as once again being caught up in a geopolitical struggle between the West and China. The Adriatic is one of the many targets of China’s Belt and Road Initiative by which Chinese leaders seek to expand their influence throughout Eurasia.

“[T]he new and vast maritime empire of China,” Kaplan warns, “threatens to overwhelm” Europe, as the Adriatic “is about to be linked with the South China Sea and the Indian Ocean as key elements of a burgeoning global trade, from Hong Kong to Trieste by way of Hambantota, Gwadar, and other Indian Ocean ports.” This may spell, he concludes, the end of the modern age of Europe.