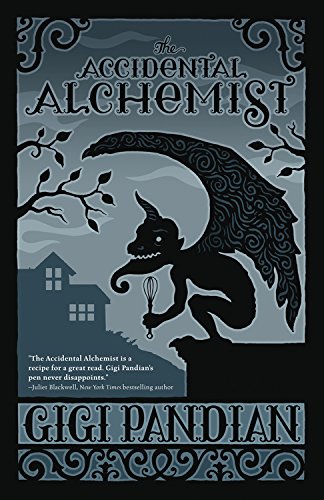 “. . . a cozy little mystery with a neat alchemical twist and some very endearing characters . . .”

Three-hundred-year-old herbalist and former alchemist Zoe Faust is determined to settle down. That’s why she’s in Portland purchasing a home. It isn’t much, a “fixer-upper” considered by most of the residents to be haunted, but it suits Zoe just fine.

“. . . the once beautiful house was falling apart . . . and the inside? Let’s just say the plumbing had seen better days—and those better days weren’t any time during the previous century. In other words: perfect.”

While opening her crates, Zoe discovers an object she’s certain she didn’t pack . . . a gargoyle, and not just any little stone creature.

‘You’re the best-looking automaton I’ve ever seen,’ I said.

The gargoyle’s shoulder moved as if it was stretching.

Introducing himself as Dorian Robert-Houdin, “son” of the famous 18th century French stage magician Jean Eugéne Robert-Houdin, Dorian has a mission. That’s why he stowed away in one of Zoe’s packing crates. It seems Papa Robert-Houdin found an alchemical book, Not Untrue Alchemy:

“He did not understand what the book was capable of . . . I was meant to be a stage prop . . . but he never considered the power of the pages from which he read.”

Dorian was brought to life, but now, a terrible thing is happening. He’s regressing.

“My body is slowly turning back to stone . . . But this is not a natural death. When I turn to stone I do not sleep. I will be awake but forever trapped in this stone shell.”

Zoe agrees to help but before she can, a teenager named Brixton breaks into her home.

’This place was supposed to be abandoned . . . we wanted to see who was living in a haunted house.’

Since Brixton has seen Dorian, Zoe reluctantly includes him in her plans so she can make certain he doesn’t tell about the gargoyle.

Then Charles Macraith, the workman hired to repair the house is killed, Dorian’s book is stolen, and Zoe meets Detective Max Liu.

“. . . he didn’t look like a typical police officer . . . it wasn’t just the fact he wasn’t dressed like one . . . he was guarded and open at the same time . . . I had the strong sense he was both genuinely friendly and hiding a burdensome secret.”

When it’s discovered Charles was poisoned and Zoe identifies the poison, she’s briefly a suspect. Then the owner of the local teashop is found overdosed and is accused of killing the workman. Zoe doesn’t believe it. Neither does Max.

Between keeping track of Brixton, hiding Dorian, and wondering about her feelings for Max, Zoe’s investigations turn up quite a few residents who could be suspects:

There’s Olivia Strum, whose tongue is so acid even her compliments sting; Heather, Brixton’s mother, a vegan artist relying on others to help raise her child; Ivan, a chemistry professor from Prague, the alchemical capitol of the world. Ivan would definitely like to get his hands on Dorian’s book. Then—of course—there’s Max himself, whose grandmother was also an herbalist.

Max tells Zoe he’s been taken off the case, because of something he saw near the crime lab. He’s seen such a figure before, while chasing a suspect through the Shanghai Tunnels, running under Portland, long before Zoe and Dorian arrived.

The examining psychiatrist reluctantly puts Max back on duty but then . . .

There’s another live gargoyle loose in this Pacific Coast town. If Zoe locates it, she’ll also find Dorian’s book, as well as the killer.

This is a delightful book, not only for the mystery it relates, but also for the historical, alchemical, and herbal tidbits it contains. The characters are oddball but likable, especially the witty little Dorian who’s addicted to reading mysteries and wants to put fictional detectives’ methods into practice. As the scenes unfold through Zoe’s point of view, it’s a good bet her wit and expertise will have the reader coming back for more.

The Accidental Alchemist is filled with clever turns of phrase, an interesting premise, and enough back-history to interest but not bore. It’s a cozy little mystery with a neat alchemical twist and some very endearing characters.