The Accidental Truth: What My Mother’s Murder Investigation Taught Me About Life 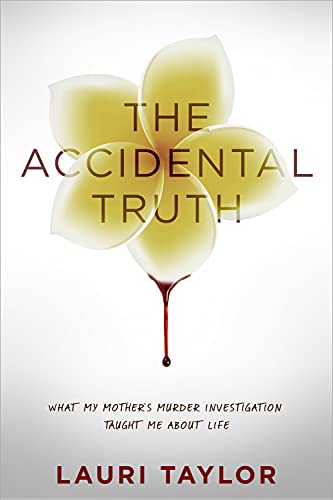 The Accidental Truth is a memoir/true crime story that is both intriguing and frustrating. Intriguing because Lauri Taylor faces a plethora of obstacles digging for information surrounding the death of her mother, yet she plows through them despite seemingly insurmountable odds. The frustration during her relentless pursuit of the truth is palpable and can be felt by the reader as well.

Lauri Taylor is a stay at home, work from home mother living a normal, albeit, hectic life with her executive husband and their two children. Her life changes forever one day when she learns her mother, Jane Kling, has been found dead, apparently a victim of homicide. The body is discovered in Mexico, which complicates matters to the extent that Lauri wonders later if her mom’s killer will ever be caught.

Notwithstanding the obvious personal loss, Lauri fights her own demons regarding the relationship between herself and her mother. She becomes introspective about the past and decides she may be partly responsible for her mother’s death due to their rocky relationship and some unresolved issues between them. Her guilt is obviously unfounded, yet it drives her to find the truth about how her mother died.

The San Diego Sheriff’s Office has jurisdiction in the case together with Mexican authorities. Right from the beginning this dual investigation is fraught with problems, not the least of which is shoddy police work and corruption on the part of Mexican law enforcement.

And as the case drags on, the San Diego authorities become so disenchanted with the lack of cooperation by their Mexican colleagues that at one point the sheriff’s office closes the investigation.

The lack of progress and answers frustrate Lauri to the extent that she vows to find the killer herself. During the course of her investigation, she finds answers to many questions, some of which she hadn’t counted on, including a few about her mother’s lifestyle. At times, she almost feels like a voyeur, secretly peering inside her mother’s life to discover her best kept secrets. Nevertheless, she moves forward as months become years and her mother’s case begins to gather dust.

Almost at the point of giving up, she learns of a former FBI profiler, Candice DeLong. Buoyed by the former agent’s pedigree, as well as her enthusiasm, Lauri enlists DeLong’s help. It’s then that the answers Lauri so longed for begin to materialize. Four years after her mom’s body was found on a beach in Mexico, Lauri and Candice DeLong finally learn the truth—one that shocks them and will surprise the reader.

The story is well written, particularly, by someone who is a first time author. Lauri Taylor does a masterful job of chronologically setting out the facts of the case and documenting the clues, leads, and results of each. It’s certain the author has a future in investigative journalism should she desire such a career.

One of the byproducts of her exhaustive pursuit of the truth was that Lauri discovered she had her own frailties and mental health issues. She realized she had been living with anxiety, depression, and PTSD, and has become a vocal advocate for those suffering from mental health issues and the stigma so often associated with them.