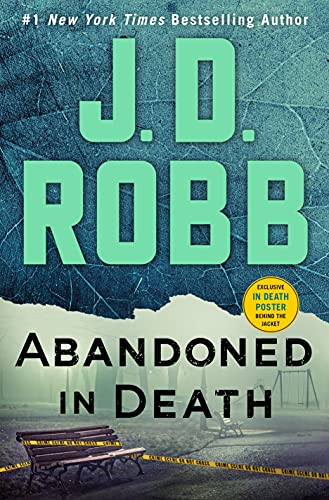 “Everyone at One Police Plaza is in for a shock as they learn someone they’ve known for years has hidden a depraved mind behind a friendly smile.”

There’s a serial killer loose in New York City, abducting young women, then killing them. He dresses them in clothing from the beginning of the 21st century, then places their bodies where children gather. Near the body is a sign printed in crayon in a childish hand: BAD MOMMY.

“He parked as close as he could and worked quickly. He rolled the gurney right up to the bench where good mommies would watch their children play in the sunshine. He laid her on it like she was sleeping and put the sign he’d made with construction paper and black crayon over her folded hands. He went back to the van and drove away. Drove back and into the garage, into the house. He fell asleep with a smile on his face and dreamed the dreams of the young and innocent.”

Now another young woman has disappeared, and Eve Dallas has gotten the case.

“Bits and pieces, that’s all she had. So she gathered them together and worked to make them fit. The mother, she thought again. It was all about the mother. The mother was the key.”

At the turn of the century, a young woman makes a deadly decision. She leaves her son on the steps of a church and drives her car into a lake. Though she survives, the trauma gives her amnesia; she doesn’t remember her name or what happened, not even her child. She’s rescued by a young doctor. They fall in love, and the misery of her forgotten life evolves into a fairy tale.

“She didn’t know where she was or how she got there. She remembered nothing before waking on the ground, surrounded by trees, with the sun pushing through the thick canopy of leaves and covering her like a blanket soaked in hot water. She knew she was a human being, a girl, a woman, but beyond that she had nothing to anchor her. She didn’t remember driving into the lake, or the sudden wild panic that had her fighting her way out of the submerged car, swallowing water, thrashing her way to the surface. She certainly didn’t remember a little boy left sleeping and alone in front of an empty church.”

And her abandoned child grows up to become a serial killer.

The information Eve learns revives memories of her—and her husband Roarke’s—own abusive childhoods. When the killer’s identity is uncovered, everyone at One Police Plaza is in for a shock as they learn someone they’ve known for years has hidden a depraved mind behind a friendly smile.

An interesting entry, though many readers may find this one a bit lacking in the interpersonal relationships that makes up an entertaining portion of this series. Notably missing is the bickering between Eve and Summerset. Only once do the detective and Roarke’s amanuensis cross swords, and Eve sidesteps with the excuse that “she’d been thinking of home and work and not of giving him a nice little jab.”

Indeed, there is a singular lack of the usual give-and-take between the characters that is so much an enjoyable part of the narration. In fact, when broken down, only about a third of the book deals with the actual investigation; the other two-thirds delve into flashbacks of the why of the crime, and the victim’s point of view.

Most police procedurals usually go step by step, but this one skips a few in the process, as if assuming the readers are already aware of them. The police eventually reach a turning point in the case when one of the techs has a “hunch.” It’s never explained exactly what the hunch consists of, merely that it helps him discover the identity of a young woman from a small Tennessee town at the turn of the century. Since this story is set 23 years from now, there will probably be better equipment to ferret out such information, but the lack of explanation still jars.

The other noteworthy hole involves the unmasking of the killer. Eve talks to a final witness, and on the next page simply announces, “It’s . . . ” There’s no preamble to say why she narrows it to that person. Indeed, the description initially sends them on a wild goose chase after someone else, so this abrupt statement may have some readers re-reading several pages to see if they perhaps missed something. Something definitely seems left out.

These little discrepancies notwithstanding, Abandoned in Death’s twists and turns should satisfy most Dallas and Roarke fans. As an added bonus, there’s an exclusive Abandoned in Death poster on the inner side of the book jacket.

Abandoned in Death is Book 54 in the long-running In Death series.