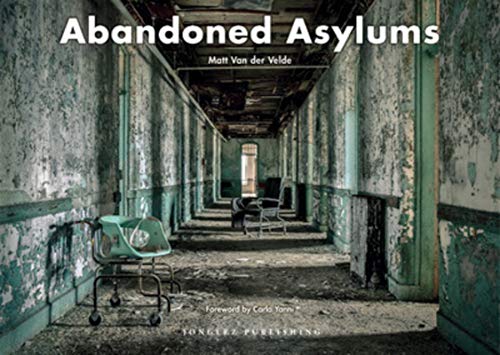 “an extraordinary achievement that allows us a greater understanding of the history of mental illness.”

Photographed inside former mental asylums across different states in the U.S., Matt Van Der Velde’s Abandoned Asylums is similar to rubbernecking at a highway accident: You feel compelled to look even though the images are unsettling. His images of empty institutions have the eerie quality of lived-in places where the echoes of those lives are still discernible.

It shows where they slept, were bathed, surgically treated, and autopsied. And although all of the photographs are of unpeopled interiors, the inference of the treatment of those patients sparks empathy. By focusing on personal items such as the slippers they used or dilapidated pianos once used for entertainment, the photographer gives us insight into the existence of the patients.

As stated in the book, most of these institutions point to a society that “rendered an entire population virtually invisible” and “created a world separate for those we dehumanized and identified as ‘not us.’” More than a few of these institutions were closed on federal orders due to inhumane treatment and resulting deaths.

Some images lean in the direction of the macabre and are spine-chillingly unsettling. It is easy to imagine the mentally unhinged struggling to free themselves from a barber’s chair worthy of Sweeney Todd even before these institutions were abandoned.

Van Der Velde succeeds in presenting these ghostly palaces as impressive interiors whose dilapidated textured appearance only adds to their aesthetic value. Indeed many of his images attain a painterly stateliness and ruinous majesty that is difficult to put into words (e.g., Walter Freeman’s Blackburn Laboratory autopsy theatre; Hudson River State Hospital, stairway; piano in a window alcove). They are a visual oxymoron, where one is simultaneously enticed by its decayed beauty and repelled by the horror of their purpose.

While the exteriors of these buildings appear grandly gothic and built to last for generations, the interiors exude a regimented melancholy that speak of betrayal and loneliness. Through his remarkable lighting, brilliant use of nuanced color, and technical proficiency Van Der Velde has done an excellent job of photographically capturing the essential air of despair. Abandoned places such as homes or ghost towns have a certain feeling to them of life lived by families; but these abandoned institutions have an aura that suggest both misguided good will and tragedy. They become a macro view of painful lives in a desperate struggle.

The book’s powerful portrayal is very informative for the layperson as to the history of the treatment of mental illness in the United States, its impact on the families of the patients, and the techniques used in treatment, such as pentothal sodium (truth serum), lobotomies, and surgical procedures for dealing with mental illness in the 19th century.

Abandoned Asylums by Matt Van Der Velde is an extraordinary achievement that allows us a greater understanding of the history of mental illness. It also displays a collection of nearly 200 full-page photographs of outstanding color and tonal range that are printed to exceptionally high standards. It is an excellent book for anyone who values photography.