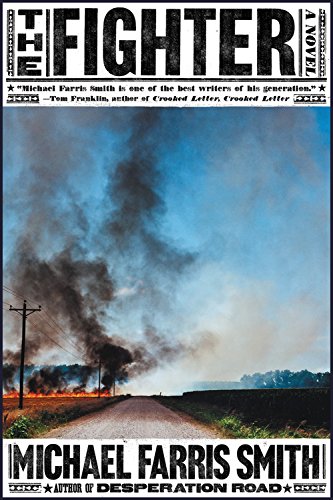 “a compelling and memorable read.”

“I guess we’re gonna have to hang a sign next to the one that says no mattresses that says no younguns,” says an unnamed woman at the beginning of The Fighter. She’s just found infant Jack Boucher abandoned in front of a Salvation Army secondhand store. Appropriately enough, the novel that follows this beginning is highly concerned with salvation, fighting, and signs.

After years of being passed around the foster care system, Jack winds up with Maryann, an isolated woman whose loneliness and need equal his own. This love becomes the bedrock of their lives, but it can’t save them from the slow destruction of time in Smith’s violent, haunting Mississippi Delta.

Jack grows up and becomes a fighter “of the first kind . . . nothing but air between fists and faces.” He enjoys a run of successes and is especially known for his unpredictability, but by the time the novel catches up with him, repeated concussions and an addiction to painkillers have left him ragged and adrift. He can’t win like he used to. His memory is so shot he has to keep a notebook of friends and enemies and leave himself messages about what to pawn or not pawn. He’s broke and desperate.

He has good reason for that desperation. Jack owes money to Big Momma Sweet, a Delta queenpin with a penchant for branding dollar signs on people who can’t pay. He’s borrowed repeatedly against the house Maryann left him and now it’s about to be foreclosed on. And even though she no longer remembers who he is, he doesn’t want to see her live out her last days when he knows he let everything that mattered to her disappear into the wind.

Like a lot of noir protagonists, he’s a man in a bad fix in need of a good solution. Circumstances bring him into collision with Annette, a heavily tattooed carnival worker whose belief that life is governed and guided by coincidence lead her to pay close attention to her run-in with Jack.

Smith’s great talent here is writing about ancient, universal concerns—parents and children, aging, and place—in a setting so vivid and specific that the book practically tracks mud up onto your doorstep. His vision of the Delta is powerful and lingering.

This is a world where Jack can drift all he likes, but where the past will always catch up with him—everywhere he goes, he’s been there before, from the motel where they warn him that he’ll have to clean up after himself if he pukes in his room again to the gas station and smokehouse that he stops at on his way back into town.

It’s a cliché of small town life that everyone knows each other, and here Smith rings the changes on that. Jack meets an opponent he can no longer recognize; he can’t check the man’s name in his notebook because the man gives him a fake one. Annette’s been looking for years for this one particular fighter. Even though Maryann gave up her lover to keep her home, everyone still knows her history well enough to use it to taunt Jack in his childhood.

There’s a claustrophobia to all this. For all the wide-ranging space, Jack and Annette are limited. No matter where they go, there their world is: a world of strip clubs and cage fights and theft and sudden violence. This isn’t a story where geography or money alone can airlift anyone to a better life.

But Smith does give them transcendence and redemption, or at least the possibility of them. Here, there’s every reason to believe in Annette’s “church of coincidence,” in a force that guides these characters to opportunities and mercies, however well-disguised. That vision adds a dreamy thoughtfulness to the novel even as it saps some of the strength of the noirish plot.

At times the machinery that moves all this around runs a little too loudly in the background, directing characters in too heavy-handed a manner toward their destined conclusions. This is, however, a problem that arises solely because Smith is ambitious enough to try to combine two ideas—that of the “church of coincidence,” the directed governance of the universe and that of down-at-the-heels tragedy made one choice and mishap at a time—that are at odds with each other. It makes the novel a kind of philosophical fight of its own.

In the end, that fight comes out a draw. The lasting image of The Fighter is one of sympathetically detailed characters at the fringes of society and the ends of their ropes in a world where their luck may be about to change. That situation makes for a genuine, breathless tension, and that makes The Fighter a compelling and memorable read.

Zoë Z. Dean is the author of the short story "Charcoal and Cherry," winner of the 2018 Thriller Award for Best Short Story and the short story “Getaway Girl,” winner of the 2015 Mystery Writers of America Robert L. Fish Memorial Award and a Distinguished Story in Otto Penzler’s Best American Mystery Stories 2015. Her short fiction has appeared in Ellery Queen’s Mystery Magazine.