36 Arguments for the Existence of God: A Work of Fiction 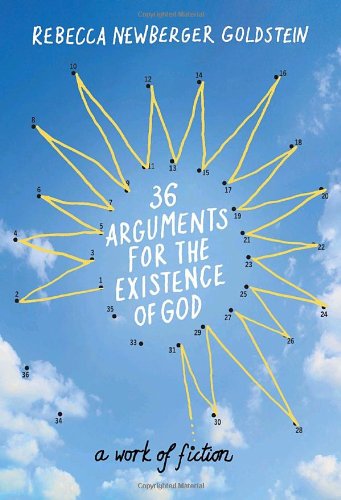 We should ask a question of ourselves, “Why am I?” We will seek the answer through religion, philosophy, rationalism and, occasionally, a good book. Author Rebecca Newberger Goldstein takes the reader on this journey of discovery within the context of a wonderful story about three men, each looking at his personal faith.

Highly acclaimed in academia and as an author, Goldstein is a prolific writer and speaker. Her 1996–2001 MacArthur Foundation Fellow citation said it best: “Her books tell a compelling story as they describe with wit, compassion, and originality the interaction of mind and heart. In her fiction her characters confront problems of faith: religious faith and faith in an ability to comprehend the mysteries of the physical world as complementary to moral and emotional states of being.”

This fictional, philosophical, witty, and maybe slightly autobiographical story is as fascinating as its author is. Her research is impeccable and her vocabulary skills, as expressed through her characters, makes 36 Arguments a wonderful balance between entertainment, intellect, and religious philosophy, with Cass Seltzer’s 36 arguments faithfully “reproduced” as an appendix to this wonderful story.

Cass Seltzer, Ph.D., and author of a worldwide sensation, The Varieties of Religious Illusions, which brings him the moniker of “an atheist with a soul,” is our guide. However, what brought Cass his fame was not the text but the appendix featuring the 36 arguments for the existence of God.

The rest of the entourage includes old girl friends, a grad student on the 20-year plan, the famous from the world of philosophy, and a few people direct from Goldstein’s own past. The hint comes from her reference to Dr. Thomas Nagel, Goldstein’s doctorial dissertation advisor.

Cass, a Jewish med school student was lead astray to the world of philosophy by Dr. Jonas Elijah Klapper, chair of the Department of Faith, Literature and Values; faculty of one, Klapper. He is a large, pompous, and near dictatorial man, whose want of vocabulary outstrips that of William F. Buckley. He is as enthralled with himself as he is by Cass’s religious and family ancestry, the Hasidic Veldener Jews of New Walden, New Jersey.

The last is Ararya Sheiner, “Ararya ben Rav Bezalel,” Ararya, son of Rebbe Bezalel. Ararya’s father and father before him and so on were rabbis. His ancestry guarantied his own ascension. Ararya is also a math prodigy, teaches himself how to read English, and makes an excellent argument for the infinite extension of prime numbers. All by the age of six.

There appears to be a speed bump with the story—a technical problem, maybe my own. Goldstein jumps the chronological line often and without warning. At one moment in the narrative, Cass is in the “present,” in his early years of graduate school, the week earlier he is in his childhood and all places between. Klapper, Ararya, and the rest of the support characters tend to follow Cass through his time travels, making it a bit difficult to follow.

Like Cass, it is Goldstein’s appendix, “36 Reasons for the Existence of God” that will provide the theist, nontheist, and philosopher the discussions for which you bought the book. Aristotelian logos with a bit of humor mixed in.

There are the usual suspects, “The Arguments from Design,” “The Ontological Argument” and “The Argument from the Intelligibility of the Universe (Spinoza’s God).” And some not so familiar as “The Argument from Prodigious Genius,” the explanation of Ararya, the future of the Veldener Hasidic, his intellect and his designation as Rabbi heir apparent.