The 300: The Inside Story of the Missile Defenders Guarding America Against Nuclear Attack 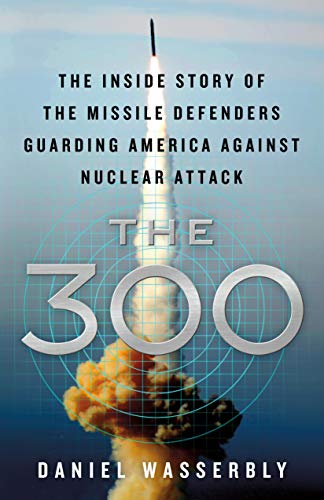 “The modern-day ‘300’ are service men and women who defend America from locations in the Aleutian Islands, Alaska, the Marshall Islands, Vandenberg Air Force base in California, the Cheyenne Mountain in Colorado, and Fort Belvoir in Virginia.”

The end of the Cold War in Europe in 1989–1991 produced widespread lessened fears of nuclear war. Arms control agreements resulted in smaller nuclear arsenals in both the United States and Russia, the world’s two most powerful nuclear-armed states. But this was really nothing more than a nuclear “pause.” Other nuclear-armed states such as China, India, and Pakistan continued to upgrade their destructive arsenals, while the rogue state of North Korea crossed the nuclear threshold, and Iran threatened to do so.

Since the dawn of the nuclear age, the United States deployed offensive nuclear weapons to deter war, but also to achieve victory in war if deterrence failed. In the mid-1960s, Defense Secretary Robert McNamara adopted the doctrine of Mutually Assured Destruction (MAD), whereby nuclear deterrence was “assured” by a reliable, survivable second-strike capability. MAD rejected the notion of strategic nuclear superiority.

Not everyone agreed with McNamara. General Earle Wheeler, the Chairman of the Joint Chiefs of Staff, backed by the Army and the Air Force, wanted to build and deploy a defense against ballistic missiles. It was the beginning of an intellectual and scientific dispute that continues to this day.

Daniel Wasserbly’s new book, The 300, briefly—too briefly—reviews the history of missile defense in the United States, especially the theoretical debate in the early 1980s. The book fails to even mention the work of retired General Daniel Graham, who in 1981 founded High Frontier to explore the science and practicalities underlying missile defense, or NASA scientist Robert Jastrow, who wrote brilliant articles in Commentary and elsewhere explaining the feasibility of various missile defense schemes.

Wasserbly, who edits the world renowned Jane’s International Defence Review, titled his book to reference the Spartans who defended against the Persians at the Battle of Thermopylae in 480 BCE. Today’s “300” are the U.S. Army’s 100th Missile Defense Brigade based in Colorado Springs, and the 49th Missile Defense Battalion based in Fort Greely, Alaska. Together, those units have about 300 personnel who, Wasserbly notes, “use phased-array radars and advanced aerospace engineering,” instead of the swords and shields used by the Spartans to defend Greeks, “to defend three hundred million Americans.”

The science behind missile defense is important but complicated. Missile defense systems are designed to alert missile defenders to the launch of ballistic missiles, track those missiles in space and in the Earth’s atmosphere, distinguish between warheads and countermeasures, and strike a small, fast-moving target from thousands of miles away. Components of missile defense systems include software, navigation systems, satellites, instrumentation, thrusters, and “kill vehicles.”

Fortunately for the layperson, Wasserbly’s book is less about science than it is about people. The author benefited from the cooperation of some of the soldiers who worked as missile defenders. His book is the story of Lt. Col. David Meakins, the original crew director of the 100th Missile Defense Brigade; Lt. Col. Richard Michalski, one of the original crew members of the brigade; Col. Michael Yowell, the brigade commander in 2006–2009; Mark Kiraly, who served as a battalion and crew director; Army Specialist Jeanette Padgett; Major Matt Pollock; and many others.

It is also the story of Gen. Greg Bowen, who served as both battalion commander of the 49th and brigade commander of the 100th; Lt. Gen. Henry Obering, Lt. Gen. Ron Kadish, Lt. Gen. Patrick O’Reilly, and Vice Admiral James Syring, who all served as directors of the Missile Defense Agency; and Lori Robinson, the four-star Air Force General who became “the first female officer to lead a unified command and . . . the highest-ranking woman in the U.S. military’s 240-year history.”

There are cameo appearances by Donald Rumsfeld who served as Defense Secretary for President George W. Bush and toured the operation at Fort Greely, Alaska; Congressman Duncan Hunter, a missile defense proponent who clashed with higher-ranking missile defenders for their repeated test failures and innumerable delays; Michael Griffin, a self-described “unreconstructed cold warrior” who served on a review team to solve testing anomalies; and Susan Rice, who served as President Obama’s National security Adviser and was present in Colorado Springs during a test launch of a North Korean road-mobile intermediate range ballistic missile.

The modern-day “300” are service men and women who defend America from locations in the Aleutian Islands, Alaska, the Marshall Islands, Vandenberg Air Force base in California, the Cheyenne Mountain in Colorado, and Fort Belvoir in Virginia. They work long, hard hours—sometimes regular 12-hour shifts—and sometimes they play hard, too. In Alaska, they and their families suffer frequent below freezing temperatures and months without sunlight.

The missile defenders have also suffered through repeated test failures due to design defects, engineering problems, equipment malfunctions, and environmental anomalies. Wasserbly outlines the difficulty in intercepting intercontinental ballistic missiles (ICBMs). “The interceptor system needs to see and track the missile at two points,” he writes, “to plot where it is heading, and then at a crucial third point to get good enough data to triangulate an intercept.” The “satellites, radar, communication networks, and computer systems,” he continues, “all must work properly.”

During the past decade and a half, the focus of the missile defenders has been North Korea. Wasserbly details the many North Korean test launches of intermediate range and intercontinental ballistic missiles that are capable of carrying nuclear warheads. Several North Korean tests failed, but some were successful, and the destructive power of North Korea’s nuclear weapons is steadily increasing.

Meanwhile China’s nuclear arsenal has been modernized, and it has engaged in recent border clashes with India, another nuclear-armed state. Iran moves ever closer to becoming a nuclear-armed state, alarming the Israelis, the Saudis, the Egyptians, and the United States. Putin’s Russia is also modernizing its still sizeable nuclear force.

Wasserbly concludes by noting that the Pentagon wants to field 20 additional interceptors, including a “Next-Generation Interceptor program,” but realistically such weapons will not be deployed until 2025 or 2027, at the earliest. Our missile defenders are on alert 24/7/365, and are now more important than ever.