25 Great Sentences and How They Got That Way 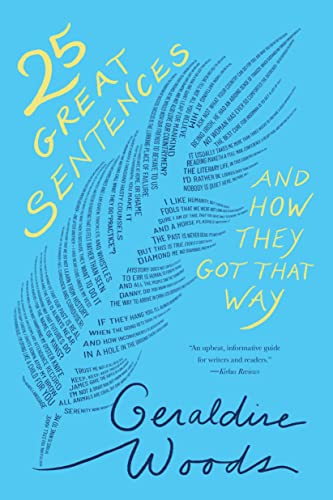 “A beautiful sentence stops you cold. You savor it not only for what it says but also for the way it is written. A ‘resonant sentence’ forces you to see the familiar in a different way.”

This delightful book surprises on nearly every page as Geraldine Woods—a marvelously prolific author and classroom teacher of English at every level from fifth grade to Advanced Placement—peels away the artful constructions behind 25 Great Sentences and How They Got That Way.

Her book will appeal to readers and writers, too. It will certainly enlarge the reading experience of everyone who enjoys a good story or a well written, and revealing, piece of nonfiction.

The author’s approach is the furthest thing from schoolmarmish. She sidesteps the impossible task of selecting the “greatest” sentences to settle on merely great ones, each of her examples accompanied by dozens of others in its class. Sentence by sentence she shows how “the smallest element” differentiates one writer’s style from another. And while all of us think to one degree or another, “few people, if any, think in sentences.”

Well, maybe we will start to do so because as she demonstrates, in a well-written sentence form and meaning “work together in synergy.” A beautiful sentence stops you cold. You savor it for what it says but also for the way it is written. A “resonant sentence” is one that forces you to see the familiar in a different way.

For example, Wood cites the opening of Virginia Woolf’s Mrs. Dalloway. Readers easily grasp its surface meaning and read on; but only at the end of the novel do they understand how that opening sentence captured both her characters’ psychology and the tragic aftermath of World War I.

Woods’ book is organized around five themes: structure, diction, sound, connection/comparison, and extremes. The authorities she cites range from Shakespeare to Yoda. Along the way she uncovers many quotes that may be new to the reader, as they were for this reviewer. Oscar Wilde, for example, said “Be yourself; everyone else is already taken.” Or George Bernard Shaw commenting on his marriage: “I knew I was planting thorns in my pillow.”

We encounter well known if shopworn examples such as Martin Luther King’s marathon sentence that opens his Letter from a Birmingham Jail, or President Kennedy’s famous “crossed sentence” from his inaugural (“Ask not what your country can do for you; ask what you can do for your country”).

But Woods gives familiar passages like as these a fresh perspective, such as framing Kennedy’s challenge “as a choice between selfishness and patriotism.” (On a lighter note, Mae West is also credited with another classic “crossed” bon mot: “I’d rather be looked over than overlooked.”)

Wood’s readers can savor her many insights into what makes a particular word a “brilliant choice,” or why the rhythmic repetition of Jack Kerouac’s famous opening of On the Road simply works. We delight to understand why Jane Austen’s sentences are full of surprise and how her putdowns of unfavorable characters constitute a rare art of irony and contradiction.

Surprise sentences, in Woods’ orbit, are those that “change course at the last minute or deliver a punch” whereas rhetorical questions slyly slip in a point the author wants to make. She likewise shows how “valuable verbs” can build and flesh out a character.

Writing in the first-, second-, and third-person point of view are covered. She also illustrates how, absent the crutch of hearing spoken dialogue, readers still “hear” internal narrative and infer tone from “details omitted or highlighted, word choice, and sentence structure.”

A chapter on simplicity illustrates the way authors must decide what is important and ruthlessly jettison interesting but extraneous detail. An example of simple contrast comes from Harvard President Derek Bok: “If you think education is expensive, try ignorance,” raising the point of how one might even measure the cost of ignorance.

Throughout, Woods is generous with her advice to close and careful readers, and to writers, too. Each chapter ends with a series of exercises and writing prompts. Scattered throughout are a number of informative and sometimes humorous callouts—the backstory of Hogarth Press, for example, run by Virginia Woolf and husband starting in 1917; musings by Aristotle and other heavy thinkers; the rhythmic character of song lyrics and advertising jingles; even a proposed punctuation mark that never made it into the English language.